It was a strange and surreal day when I visited The Surratt House, only a few miles outside of Washington, DC  in the town of Clinton, Maryland. It was a rainy day and it was foggy when I arrived at the house. A few weeks ago, when I visited Fords Theater, I decided to visit the former home of Mrs. Mary Surratt who is one of the most likely misunderstood and vilified women in history.  Her story is so intriguing and fascinating and I just wanted to see for myself where she one lived and to try to figure out what brought a simple wife and mother to the hangman gallows in Washington, DC on July 7, 1865. 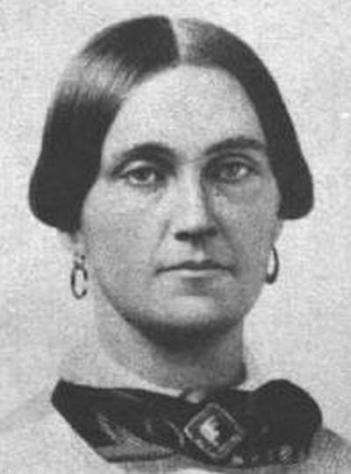 Mrs. Mary Surratt holds has a unique and infamous role in American history as the first woman put on trial and then sentenced to death in a military court. This was, of course, due to her questionable involvement in the plot to assassinate President Abraham Lincoln. Although friends and family testified at her trial that she was a good Christian woman who was not involved in all with the conspiracy to kill President Lincoln, Mary Surratt, along with three other men, were executed by hanging for treason. The only offense committed by Mrs. Surratt was being the owner of the boarding house where the real conspirators planned the attack on President Lincoln’s life. The exterior of the Surratt House (photo credit: The Historical Traveler)

Mary Surratt’s parents had owned a farm, which she later inherited along with her husband, John Surratt. The Surratt’s also invested in a town house on H street (located near Ford’s Theatre) and converted their other home (in what was called Surrattsville) into a tavern due to it’s convenient location to major cities including Washington, DC. 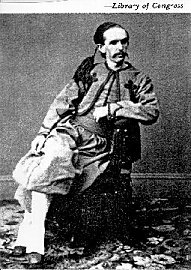 The Surratt’s had three children: Isaac, Susanna, and John Jr.

The tavern did more than serve drinks to visitors. Guests could also vote here, pick up their mail, and have a warm dinner and lodging overnight for a decent fee. The Bar with the Post Office Slots (Photo Credit: The Historical Traveler)

(Interesting fact: People used to pay to pick up their mail. In an effort to save money, peers would tell whom they were writing to that receiving a letter was enough to signal their safety, and there was no need to spend money to pick up their mail. This led to the usage of postage stamps, where you had to pay money to send mail rather than receive it.)

Upon her husband’s death, Mary Surratt turned the tavern over to John Lloyd while Mary took Susanna and John Jr. to live in their boarding house in Washington, DC.

The tavern formerly owned by Mary Surratt was restored in the 1970’s, but maintains furniture all from the period. There are two original pieces still in the house now: the round table and Mrs. Surratt’s French writing desk.

A unique feature of the house, which was uncommon for the time, is the kitchen addition to the house. Most kitchens were separate attachments to prevent house fires, but the Surratt’s had a tin burner that reduced the chances of a house fire significantly.

Kitchen in the Surratt House (Photo Credit: The Historical Traveler)

(Interesting fact: windows and doorframes are blue in the kitchen because at the time, it was believed that flies and other insects would not cross over due to their confusion of thinking it was the sky)

Bedroom made to look like Mr. and Mrs. Surratt’s (Photo Credit: The Historical Traveler)

Before that fateful April night in 1865, John Wilkes Booth made a request of Mary Surratt to bring a package to her old tavern, upon learning of visiting John Lloyd. Around the same time, two carbine rifle were hidden in the attic of the house. John Wilkes Booth took one rifle after escaping from Washington, DC and the other was recovered by Lloyd and investigators after having fell through the rafters. 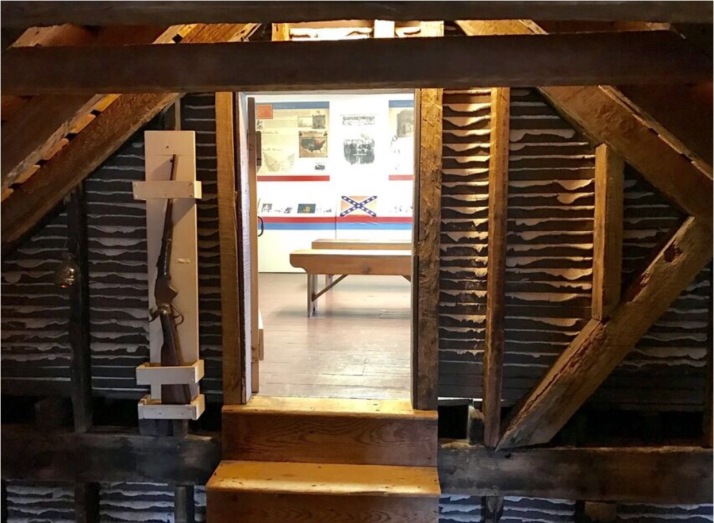 picture of attic and rifle on the side of the door, where it initially was hidden (Photo Credit: The Historical Traveler)

The trial of Mary Surratt was controversial for several reasons.  Despite testimony from peers and neighbors who claimed she was a good Christian woman, she was sentenced to death by a military court, causing more controversy because people felt that it was unjust for the military to convict her when women weren’t permitted to enlist. People felt that the only crime she committed was that she was the owner the property where the conspirators met and hatched the assassination plot.

Picture of the four executed conspirators. Mrs. Surratt is on the far left with the rope around the bottom of her waist.

(Interesting Fact: Traditionally a noose was wrapped around the neck 8 times of the men about to be put to death. Because Mary Surratt was a woman, they only wrapped the rope 5 times because they believed that she most likely was not going to be executed because after all – she was a woman and women didn’t get put to death.  This had never happened in US history until then)

Mary Surratt is buried in Mount Olivet Cemetery in Washington D.C. However, her gravesite is not marked per request of her family.

I’ve merely skimmed the surface with information that is available only at the Surratt House. I thoroughly enjoyed every minute there as a follow up to Fords Theater. The tour guides are very knowledgeable and can answer any questions. Tickets are very inexpensive too. They offer senior and student discounts too! To plan your trip and learn more about the first woman ever executed by the U.S. Federal Government, visit the Surratt House Museum.